You’ve really got to hand it to those Israelis. They are truly experts at creating lethal, genetically-damaging, sterility-causing, radiation-emitting technologies and then convincing stupid Americans that such technologies are beneficial.

25 ultrasound scans is ALOT of radiation, especially when you consider that a single scan can cause DNA damage equivalent to the damage caused by 250 chest x-rays.

And then, of course, there’s that pesky little sterility issue that will almost surely guarantee that any baby repeatedly exposed to ultrasound will have fertility problems if and when they actually reach adulthood.

Awwww – what the heck! Buy one anyway! And be sure to repeatedly hold your cell phone right on top of your pregnant belly and thereby ensure the demise of your own bloodline.

For detailed information about the dangers of prenatal ultrasound, please read: “The Dark Side of Prenatal Ultrasound and the Dangers of Non-Ionizing Radiation.”

An Israeli startup is in the final stages of developing a revolutionary handheld ultrasound device that will allow pregnant women to check on the health of their baby using only a smartphone.

PulseNmore LTD. says its device can connect to any smartphone, displaying the images on its screen and sending them to the pregnant woman’s personal doctor for examination, Hadashot TV reported Tuesday.

The invention could revolutionize ultrasound tests and the frequency in which expectant mothers check on their unborn child, especially in Israel, where women undergo 6-8 tests on average, according to Prof. Israel Meisner, head of the Obstetric Ultrasound Unit at Rabin Medical Center in Petah Tikva.

“The new development has one big advantage, which is the calming effect,” Meisner told Hadashot. “Women sometimes don’t feel movement, call their doctor and are told to go to an emergency room. Here there’s the option to put a phone on her stomach and see her baby.”

“The purpose is to use it only when necessary, when there’s anxiety,” Dr. Elazar Sonnenschein, co-founder of PulseNmore, told the TV station. 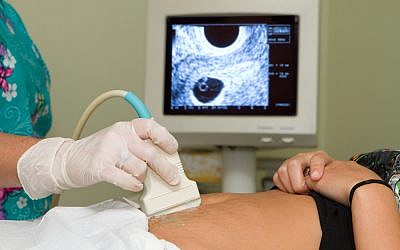 The device has yet to receive approval from the Health Ministry. But the company says it has been successfully tested in the United States.

PulseNmore says its device can be used for up to 25 ultrasound checks and will retailed at around NIS 700 ($190) once it receives certification from the Health Ministry.

That cost doesn’t include payment to the doctor examining the image. But the startup said it was in talks with Israeli health funds on the subject, since the device could save them money by making costly ultrasound tests unnecessary.

“To prevent misunderstandings: this is not an ultrasound to check for defects or pregnancy measurements,” Meisner said. “This is a device with the sole purpose of calming a woman down, to give her the chance to see her fetus, connect to it when she is stressed, and understand that it is looking okay.”