As new 5G-enabled “smart ambulances” rush to the hospitals, we ask if they are also rushing patients and paramedics directly into a health crisis.

Futurists rejoice! It’s the dawn of the Fourth Industrial Revolution, where all your sci-fi dreams can and will come true. Or so the telecom industry would like you to believe. 5G is poised to revolutionize… well, everything. From video streaming to virtual gaming, the future is supposedly at hand.

We are being sold that healthcare is one of the top economic sectors to benefit from 5G technologies, from physician-to-physician consultations to at-home monitoring to video-based telemedicine. China has already conducted its first robot-assisted remote surgery (on animals) using Huawei’s 5G-network technologies. Chicago’s Rush University has teamed up with AT&T to become one of the first 5G test hospitals in the United States. And across the world, emergency response teams are testing 5G technologies to develop the “smart ambulance” and the “data-empowered paramedic” in order to revolutionize and transform patient care.

But what if 5G healthcare is its own health emergency?

As in the United States, Britain is moving full speed ahead in rolling out 5G test grounds around the country. In June of this year, West Midlands 5G (WM5G), the UK’s first region-wide 5G testbed, teamed up with University Hospitals Birmingham NHS Foundation Trust (UHB) and BT to simulatea paramedic in the field performing an ultrasound scan on a patient, while a clinician in a remote location interpreted the ultrasound image in real-time. Hosted by the Medical Devices Testing and Evaluation Centre (MD-TEC) in UHB’s simulation lab at the Institute of Translational Medicine, this demonstration revealed that the very idea of a 5G connected ambulance is no longer just an idea.

Providing new technologies to frontline staff to create a facility for patients to be diagnosed and triaged in an immediate and appropriate medical setting, this type of 5G connectivity will enable paramedics to perform remote diagnostics, supported by clinicians based in the hospital. Sounds great, but there are dire health consequences for both patient and paramedic in this microwave box on wheels. And are we already seeing this play out?

In September 2019, O2, a leading telecommunications services provider in the United Kingdom, announced it will be providing connectivity for a new “Smart Ambulance” at Millbrook Proving Ground, a vehicle testing facility in Bedford. The purpose of the trial is to enable O2 to develop and test the system “before it is deployed on the public network, replicating real world 5G capabilities.” According to the press release on O2’s website,

“The project will involve equipping a standard ambulance with state-of-the-art devices and connectivity to create a ‘Smart Ambulance’ that will simulate 5G connectivity, transforming the vehicle into a unique remote consultation room.”

In a concerning series of events, news reports out of England have revealed that three employees at the East of England Ambulance Service Trust (EEAST) died suddenly last month. An article in the Welwyn Hatfield Times reports that the EEAST employees included: Christopher Gill, 41, who died at Welwyn Garden City’s Birch Court in Howlands on November 15; and another paramedic from Luton, Richard Grimes, and 999 operator Luke Wright, 24, from Norwich also died between November 11 and 21.

The Mirror reports that “Shortly before their deaths a whistleblower wrote to the East of England Ambulance Service NHS Trust’s boss complaining about psychological abuse. Former health minister and local Lib Dem MP Norman Lamb, who also received the letter, is calling for an independent investigation into the deaths.”

“We are extremely sad about the deaths recently of three of our colleagues.

“We have extended our sympathies to their families and friends at this difficult time and we have provided immediate support to them and to our colleagues, including a helpline staffed by trained experts.

“The Trust takes any concerns about the health and wellbeing of its staff extremely seriously and will always offer support to those staff who may require any help.”

Thank you for all the messages of support following the sad news about our colleagues recently.

If you’re struggling, or know someone who is, please reach out – help is available. 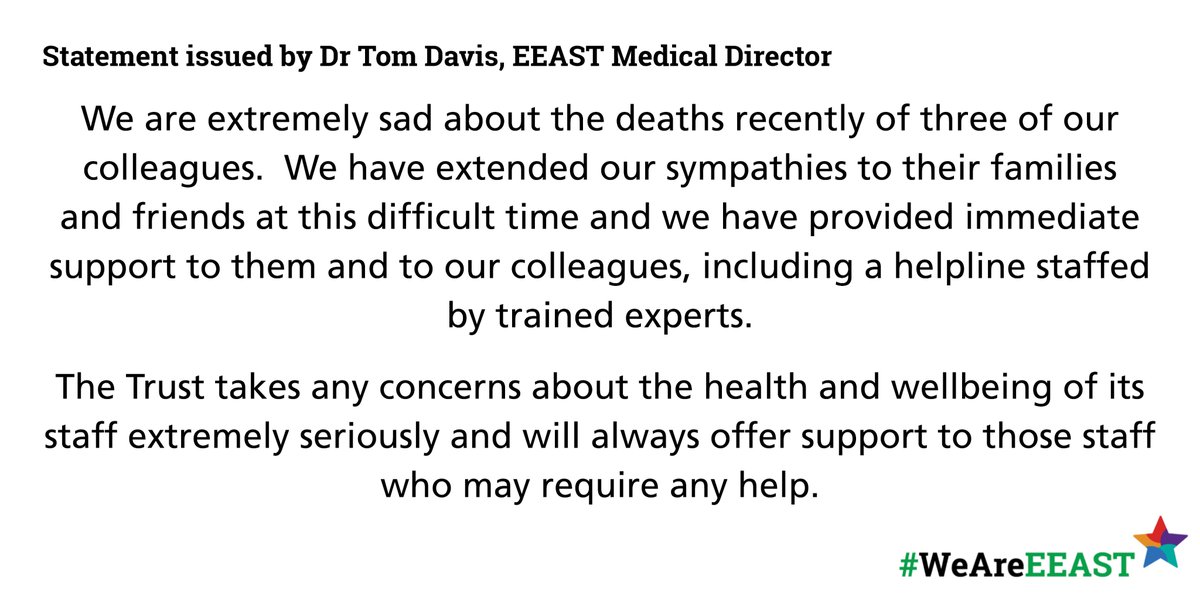 Examining the Link to 5G Trials

When contacted about the incident and cause of death for the EEAST employees, a media relations representative from EEAST told us:

“There is an ongoing investigation and out of respect for the families of our colleagues we will not be releasing any further information…. We do not have 5G enabled smart ambulances and we are not trialling or using 5G technology.”

However, a September 2019 Mobile Marketing article about the O2 smart ambulance testing states,

“O2 is currently providing the devices and connectivity for a similar trial involving six ambulances at the East of England Ambulance Trust, led by Visionable, and funded by the UK’s innovation agency Innovate UK.”

Also in September 2019, the Telegraph reported,

“O2, the mobile phone giant, is set to begin testing ‘smart ambulances’ equipped with next generation 5G technology later this month in a deal with Samsung and the NHS. Britain’s biggest mobile network operator by number of users will pilot the technology on six ambulances from the East of England Ambulance Trust to create new services for emergency vehicles such as real-time video technology and high-quality scanners.”

Additionally quoted in the Telegraph article is Lynda Sibson, telemedicine manager with East of England NHS, who said:

“Extending this type of care into smart ambulances is an exciting next step in critical and pre-hospital emergency care.”

The cause of death for these three EEAST employees has not yet been confirmed nor released publicly. But numerous reports online indicate the declining mental state of EEAST employees, referring to the work environment as “very hostile” and the culture as “cancerous.”

Could there be a connection between 5G deployment in the region and the sudden deaths of these employees? Isn’t this worth questioning further?

Internationally, communities are protesting the rollout and implemented of 5G and related technologies, citing both biological health and environmental concerns, and vast surveillance implications. Activist groups and organizations, including the Cornish group Villagers Against Masts (VAM), have launched local and national campaigns “to call for greater scrutiny of mobile phone technology and coverage, citing serious concerns over health risks, especially mental health.”

VAM is particularly outspoken about the 5G “weapons grade” new phone technology which is being tested in Cornwall, sparking physical and behavioral health concerns, after an unprecedented number of suicides at Bristol University in the region. In a quote from an article in CornwallLive, Jane Harvey, founding member of VAM, says,

“[S]he has deep concerns about the amount of masts needed for 5g network …. Jane said research showed that having rolled out 5G in US, there has been massive spikes in depression and anxiety, as well as a host of other complaints. 5g is a weapons grade frequency. There is no knowing the future implications for us – we are the guinea pigs.”

5G will massively increase electromagnetic radiation in both the microwave and millimeter wave frequencies in our environment. This next generation of wireless telecommunications will use both our current 3G and 4G wireless frequencies and also add higher frequencies in the submillimeter and millimeter waves. These new frequencies have never been evaluated by experts independent from industry for biological and environmental safety, nor were they evaluated for the synergistic effects with our current technologies. Should our first responders be telecom’s unwilling test subjects in this massive human experiment? Is the “smart ambulance” really about offering better patient care and developing fully connected mobile treatment centers?

Hundreds of peer-reviewed studies have shown biological effects from non-ionizing radiofrequency radiation. Some of these effects include increased cancer risk, cellular stress, increase in harmful free radicals, genetic damages, structural and functional changes of the reproductive system, learning and memory deﬁcits, neurological disorders, and negative impacts on general well-being. Does this sound like a wise choice for an emergency vehicle to transport sick and injured patients to the hospital? Sure, let’s put a patient suffering cardiac arrest in a vehicle pulsating with microwave frequencies known to cause cardiovascular health effects. Will that patient even get to the hospital?